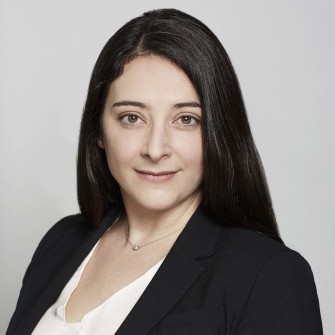 She has experience in a wide range of matters involving commercial law, civil and professional liability as well as in regulatory litigation and regulatory investigations. She frequently represents foreign clients, including in matters of private international law and challenges to the jurisdiction of Quebec courts. She has further expertise in areas of public and administrative law.

In the course of her practice, Elisabeth has had extensive experience with a range of complex business disputes and with alternative dispute resolution procedures, including the coordination of multidisciplinary teams of experts and lawyers in various jurisdictions.

She is frequently called upon to advise her clients in non-litigious matters as well. She provides regulatory and compliance counsel in a range of industries, including technology, social media, health, and manufacturing. She advises clients in relation to the compliance of their activities, operations and business practices, including matters related to data protection, privacy laws, intellectual property and consumer protection.  She also assists her clients in managing their business-related risks, particularly by reviewing contracts and providing advice to help them avoid litigation.

Representing an original equipment manufacturer of industrial equipment in an arbitration related to the performance of supplied equipment and associated production loss.

Represented foreign states, public authorities and state corporations in disputes involving the recognition and enforcement of foreign judgments and arbitration awards, as well as other questions of private international law and the immunity of foreign states.

Represented a public body in a lawsuit regarding the cancellation of a large contract for the manufacture of ambulances involving important questions regarding the termination of a contract following a call for tenders, abuse of rights and damages.

Represented production companies and other companies in the entertainment industry in several commercial litigation files.