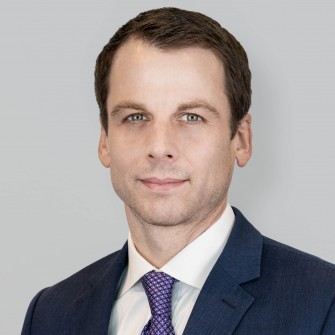 He also practices energy law and, over the past twenty years, he advised his clients on their natural gas purchase and sale contracts and represented them in the context of complex litigations and key transactions in the natural gas industry. He has also acted in large-scale proceedings before the Régie de l’énergie and civil courts.

He chairs the executive committee of the Alternative Dispute Resolution Section of the Canadian Bar Association, Quebec Division. He teaches international arbitration at the École du Barreau du Québec. He also contributed to the promotion of dispute prevention and resolution processes by sitting on the Liaison Committee with the Superior Court of the Canadian Bar Association, Quebec Division, as well as the sectoral table for civil and commercial arbitration of the Institut de médiation et d’arbitrage du Québec.

Services de gaz naturel RBC Inc. v. 9080-9211 Québec Inc. (Les Propriétés Victoria) et al.
Counsel for the plaintiff in a natural-gas related lawsuit against the owner of several buildings in Montreal who refused to pay its natural gas bills after the sale of the buildings, primarily on the basis that the contract at issue was a contract for services that could be cancelled at any time. The Quebec Superior Court allowed the plaintiff’s action. That decision was appealed to the Quebec Court of Appeal, which upheld the trial judgment in favour of the plaintiff in its entirety. Leave to appeal was subsequently denied by the Supreme Court of Canada.

Athena Energie Marketing Inc. v. Mehrzad Peyrow
Counsel for the plaintiff Athena in a natural-gas related lawsuit against a defendant who refused to pay its natural gas bills. The defendant alleged that in its application of the liquidated damages clause / mitigation of damages clause in the natural-gas supply contract, Athena had failed to respect its obligation to minimise its damages. The Superior Court of Quebec allowed Athena’s action in part. On appeal, the Quebec Court of Appeal overturned the trial judgment to the extent it favoured the defendant, and confirmed that Athena had, under the circumstances, properly applied the contractual provisions at issue.

Transfer of clientele from one supplier to another
Represented a major Quebec natural gas supplier in connection with the assignment and transfer of its clientele to another supplier.

Sale of Athena Energy Marketing to RBC
Represented the selling shareholders in connection with (and subsequent to) the sale of the shares of the largest independent Quebec natural gas supplier to a major Canadian financial institution.

CI Investments Inc. v. The Coconut Tree Holding Inc. et al.
Lead counsel to the team that allowed CI Investments to prevail in a major dispute over the application of an indemnity clause following the sale of an enterprise.

Chalets Chanteclair v. Panorama Capital Inc. et al.
Counsel for the defendants in connection with multiple proceedings filed against the plaintiff, contesting applications for injunctive relief and actions for damages.

Remer v. Remer
Counsel for the defendants, who prevailed in Quebec Superior Court and at the Quebec Court of Appeal, in a lengthy and complex shareholder dispute with more than $100 million at stake.

General Dynamics, a U.S. multinational corporation
Representation and advocacy in connection with a dispute over a share-purchase agreement in the arms and ammunition industry.

Piro v. Novopharm
A test case in which the issue of the constitutionality of legislative amendments in 2003 to the procedural rules applicable to the authorization (certification) stage of class actions was argued before various levels of Quebec courts.

2007 – Wrote a paper entitled “La clause d’arbitrage : est-ce la panacée?” (The Arbitration Clause: Is it a Cure-all?) distributed to participants at a Canadian Bar Association seminar on business law

2007 – Wrote and presented a paper entitled “Overview of Litigation, the Plaintiff’s Perspective” for members of Business Network International, Montréal-Premier and Bus Tango chapters

Since 2012 − Member of the Executive Committee of the Alternative Dispute Resolution Section of the CBA, Quebec Division

Between 2005 and 2009 − Member of Business Network International, Montreal-Premier Chapter

2007 – Member of the executive committee of the Bankruptcy and Insolvency Section of the CBA, Quebec Branch

Since 2006 – Member of the Multiple Sclerosis Society of Canada