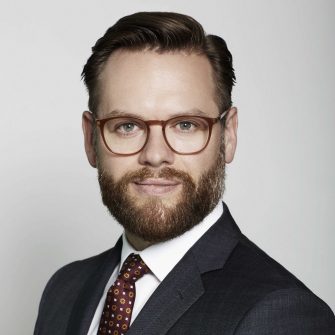 David’s clients regularly seek him out to represent them in disputes or advise them on strategic issues related to their businesses. Recognized for his pragmatic approach and efficiency, David distinguishes himself both in trials and alternative dispute resolution (ADR).

Having worked for a Real Estate Investment Trust (REIT) as director of acquisitions, legal counsel and financial analyst, David has developed an in-depth knowledge of the commercial real estate market, both locally and in the United States.

Public procurement law – Professional liability
Won a case for an architect in a lawsuit brought by a bidder claiming to have been wronged in the awarding of a public contract after the withdrawal of certain work listed in the tender documents.

Construction law – Professional liability
Won a case for a consulting engineering firm sued following the collapse of the concrete slab of a commercial building by proving that the firm had duly fulfilled its obligations to advise and inform the client regarding the construction method chosen by the latter.

Professional liability – Insurance law
Won a case for an engineer and an engineering firm sued following the collapse of the roof of an industrial warehouse where a forklift had struck a support column.

Professional liability – Construction law
Won a case for an architect sued following the premature deterioration of a luxury residence for which he had sealed the plans to obtain building permits, successfully demonstrating the limitation of the mandate given and effectively attacking the credibility of the plaintiff’s expert.

Professional liability – Hidden defects
Won a case for a home inspector sued in a claim seeking the annulment of the sale of a residence whose foundation was partially laid on an exposed rock outcrop in the basement.

Insurance law – Professional liability
Acting as legal counsel for an engineering firm in a multitude of lawsuits totalling over $10 million brought by the City of Gatineau and several of its citizens following major floods allegedly caused by deficiencies and defects affecting the retention basin.

Insurance law – Professional liability
Acting for an engineering firm sued following a corona discharge-induced explosion of an electrical switchgear in a paper mill, resulting in a claim of over $4 million for business interruption.