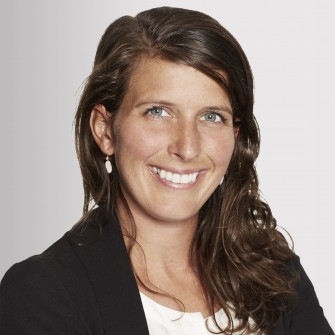 Miriam Robitaille is part of the corporate and commercial law team at the Quebec City office of Langlois Lawyers, specializing primarily in mergers and acquisitions, corporate reorganizations and in real estate law.

She advises the firm’s clients on a variety of business law matters, mainly with regards to the purchase and sale of businesses, investment, financing, corporate structure and shareholders’ relations.

She has taken part in several significant and successful real estate transactions, advising a number of commercial and industrial clients with the sale of hotel resorts, property portfolios and industrial facilities including power plants and port installations.

Prior to joining the Langlois team in 2016, she acted as legal counsel for Quebec on behalf of a major wind farm owner in Quebec, where she worked with multidisciplinary teams on various elements of development, construction, power sale/purchase and operations of wind farms.

In 2018 Langlois was the law firm of choice of several major organizations for their mergers & acquisitions-related transactions. Langlois’ transactional group assisted important groups of businesses as well as foreign multinationals with several major projects, including strategic acquisitions, financings and equity investments. It was an interesting and active year rich in challenges for Langlois’ transactional group!

Retrospective of Langlois’ 10 Most Representative Mergers & Acquisitions Mandates of 2017

The expertise of Langlois Lawyers in the areas of technology, transportation, intellectual property, labour law, Northern development, environmental law and real estate law was called upon in several major and impactful mergers and acquisitions files that the firm handled in 2017.

Sale of rental properties
Langlois Lawyers represented a property vendor with matters related to the commercialization and sale of a portfolio regrouping ten commercial buildings in the city of Québec, for a total amount of approximately $60,000,000.

Corporate structure for a real estate development
Langlois’ team advised real estate investors in the context of the acquisition and development of lands in Quebec City, in order to build a major residential complex. Our lawyers negotiated and drafted all main agreements relating to the limited partnership structure and ancillary commercial agreements.

Corporate structure for fishing venture in Nova Scotia
Langlois’ team assisted its clients in the negotiations of a limited partnership in order to create a sustainable commercial fishing venture with local partners in the Maritimes, including agreements for the commercialization of seafood products.