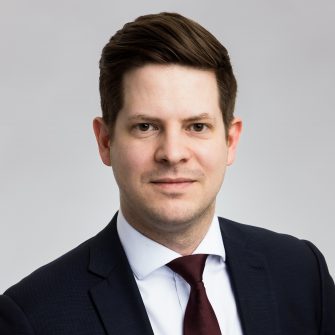 In construction litigation, René-Martin represents, both as plaintiff and defendant, owners, general contractors, subcontractors and consulting engineering firms, with a particular focus on alternative dispute resolution.

René-Martin also has extensive knowledge and experience in public procurement matters. He advises owners and tenderers at all stages of the procurement process, particularly in drafting tender documents. He assists local and foreign companies with respect to the requirements to carry out construction work in the province of Quebec, including the license issued by the Régie du bâtiment du Québec and the authorization to contract with public bodies delivered by the Autorité des marchés publics.

Moreover, René-Martin has a particular interest in the integration of technology within the construction industry, including the BIM (Building Information Modeling), artificial intelligence and smart contract.

Advised a port authority, as part of a design-build project for the deep sea container terminal

Advised a public organization from the health and social services network, in connection with five public calls for tender for the awarding of procurement and services contracts, related to the acquisition of new IT and telephone infrastructures

Advised a general contractor, in the context of a dispute totalling more than $11 million, namely a claim for $2.4 million for a contractual balance against a public client, and in defence of a counter-claim for $8.2 million for alleged corrective work and damages resulting from a biomethanization project carried out in design-build mode

Advised a general contractor, in the context of a claim for contractual balance, delays and additional costs against a municipality in the amount of more than $15 million in connection with road and water treatment work

Advised a consulting engineering firm, in a claim of $11.5 million brought by a public client in connection with alleged errors and omissions in the structural plans and specifications

Advised a drilling contractor, in a dispute totalling $5.3 million, including a claim for contractual balance and additional costs against a general contractor in the amount of $2.8 million, and in defence of a counter-claim of $2.7 million for delay costs and other damages

2021 –Will the project delivery method be replaced by an alternative approach?

2019 –Public contracts: The complaint procedure is now accessible to businesses interested in public and municipal contracts awarded by public tender

2018 – Adoption of Bill 108: The Autorité des marchés publics will oversee the process of awarding public contracts through tendering and mutual agreement

2018 – Non-compliance in public calls for tenders: A step towards faster dispute resolution?

2016 – Public contracts: The Autorité des marchés publics will ensure the honest and fair treatment of tenderers for public contracts in Quebec

2015 – Quebec public contracts/voluntary reimbursement program: The end of the story?

2015 – Quebec: Government tables a draft regulation on IT contracts with public bodies

2015 – Public contracts: The Autorité des marchés publics authorization required for service contracts and subcontracts of $1 million and over starting