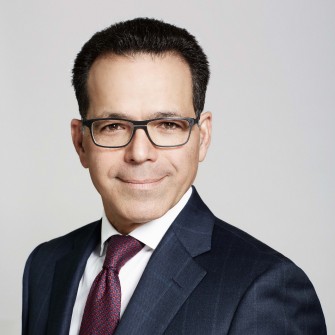 Gerry Apostolatos is a partner at the Montreal office of Langlois Lawyers. He is recognized for providing top strategic advice and has versatile expertise in litigation, arbitration as well as restructuring and insolvency. Gerry also advises on private equity/M&A transactions and is considered a “go-to lawyer” for matters related to Quebec. He is a former Chair of the firm’s Board of Directors.

With over 30 years of trial and appellate experience, appearing regularly before a range of tribunals, arbitral bodies and courts in complex high-stake disputes, Gerry has acted in some of the most important litigation in Canadian history from a financial perspective. A sample of his representative work is listed below.

As a leading specialist in the area of insolvency and financial restructuring, he has also represented notable corporate debtors and other key stakeholders with respect to a wide range of reorganizations. Furthermore, he has served the profession as National and Quebec Chair of the Insolvency Law Sections of the Canadian Bar Association and has acted as Chair of the Liaison Committee of The Bar of Montreal with the Commercial Division of the Superior Court (the equivalent of the Commercial Court Users’ Committee in other Canadian provinces).

Throughout his career, he has dedicated himself to the promotion of the rule of law, law reform, the continued improvement of the judicial system, and the public interest, as illustrated in part by his prior membership on the Disciplinary Board of the Quebec Bar and his long-standing and sustained involvement with the Canadian Bar Association, culminating in his presidency of the Quebec Branch of the Canadian Bar Association.

He is a sought-after speaker and commentator in legal and business circles.

Gerry believes in volunteerism as well as civic responsibility. His wide range of contributions includes climbing Mount Kilimanjaro for the benefit of the Heart and Stroke Foundation of Quebec, contributing to foundations and educational institutions, pro bono legal work and volunteering as a community soccer coach.

Recognized as an important member of Montreal’s business community with Mr. Martin Thibodeau, President, Direction du Quebec, Royal Bank of Canada, by the Canadian Associates of Ben-Gurion University of the Negev, Israel

Advising in various areas of the law in connection with numerous industries. Leveraging the power and expertise of the firm to achieve exceptional results for clients, often in the most challenging of circumstances, including in fraud (Norwich orders), Mareva injunctions (asset freezing) and Anton Piller orders (civil search), anti-corruption, procurement, labour and employment law, mining law, construction law, intellectual property, technology, competition law and corporate matters.

Davy Global Fund Management with respect to a US$15M loan to an Italian debtor operating in the dry cargo shipping sector in the context of the contestation of an application for recognition of a foreign proceeding. The ship had been previously arrested and not released by the Federal Court of Canada after issuance of the Canadian recognition order by the Superior Court of Québec.

Ad Hoc Committee of Independent Second Lien Lenders of around US$40 million in the Cirque du Soleil CCAA/Chapter 15 filing.

Sale of financially distressed businesses and most recently in an interprovincial context to an international conglomerate and a national plumbing fixtures company.

Mitsubishi Chemical Corporation in the BioAmber CCAA/Chapter 11 matter where IP licensing issues were at play in connection with a sustainable chemicals company.

Unilin Beheer BV in IP and patent litigation enforcement at the intersection with the application of federal insolvency legislation.

A major Canadian law firm in the CCAA/Chapter 11 filing of Performance Sports Group as regards insolvency and IP issues.

Several insurance corporations with a multitude of multimillion-dollar product liability claims in the Aquadis CCAA matter.

Pension committees with a claim of approximately $78 million in the CCAA sale and reorganization of Quebec regional newspaper group, Groupe Capitales Média.

Provisional Administrator of seven pension plans with a claim of approximately $400 million in the White Birch CCAA matter.

Holders of NSR royalties in defence of an attempt to disclaim and terminate the NSR agreements in the mining sector.

Agricultural Financial Services Corporation in the reorganization and sale of Abitibi Helicopters, a company operating in the heliportable seismic support in North America, mineral exploration and firefighting operations.

Major international insurance company as regards to several insurance and insolvency issues in the cross-border Kraus Group CCAA/Chapter 15 matter with regards to a $100 million policy.

Canadian and foreign landlords and other creditors in the Aldo, DavidsTea, Spectra Premium and Laura’s Shoppe CCAA/Chapter 15 matters.

Most major Canadian airport authorities in the CCAA matter and subsequent liquidation of Jetsgo, a Canadian airline.

Defendants in a lengthy and complex shareholders’ dispute where the amount at stake largely exceeded $100 million, and in which matter was granted one of the largest cost awards.

Intervening shareholder in the Supreme Court of Canada in the context of the contestation of the $35 billion leveraged buyout of BCE, involving inter alia the nature of the duties of corporate directors and the oppression remedy in Canada, as co-counsel.

Aéroports de Montréal in the landmark judgment of the Supreme Court of Canada on the nature, scope and extent of the seizure and detention rights of Canadian airport authorities.

Statoil Canada Ltd. in multi-party real estate litigation in an insolvency context in the Superior Court of Quebec and in the Court of Appeal of Quebec.

One of the world’s largest manufacturers of machine-made carpets in a precedent-setting dispute which involved the United Nations Convention on Contracts for the International Sale of Goods, Quebec civil law, and Canadian insolvency law.

One of the world’s largest renewable energy firms in a dispute with a utility services provider.

Bank liquidators in the multijurisdictional liquidation of Stanford International Bank and in multi-billion dollar litigation against a major financial institution, as Quebec counsel.

One of Canada’s largest energy companies in Norwich proceedings in an inter-provincial context to obtain the disclosure of information identifying online wrongdoers.

Private curator and then liquidator of an estate in connection with a dispute involving questionable transactions initiated by a third party.

General Dynamics Corporation in a litigation arising from an agreement of purchase of shares in the field of arms manufacturing.

Japanese multinational corporation in an injunction matter with cross-border implications in the field of industrial and energy equipment.

The prime contractor in a construction dispute with the Government of Nunavut under Northwest Territories arbitration law over the building of an airport runway.

A key counter-party in an ad hoc arbitration on the interpretation of natural gas supply contracts in an inter-provincial context.

A North American supplier in an ad hoc arbitration regarding distributorship agreements in a cross-border context.

A major international businessman in an ICC arbitration over supply issues for his private jet.

A foreign entity in an ICC arbitration over services provided in the international defence industry.

A California bank on issues relating to domestic and international arbitration.

2013 – Purchasers in CCAA Court-Approved Asset Sales Remain Subject to the Jurisdiction of the Court Even After Closing.

2015 – Presenter at the Annual Convention of the Quebec Bar

2009 – Presenter at a Symposium of the Canadian Bar Association, Quebec Division, in cooperation with the Faculty of Law of McGill University, regarding the Supreme Court of Canada’s judgment in the BCE matter

Gerry Apostolatos is the co-founder of the first Pan-Canadian Conference of the Canadian Bar Association on Insolvency and Restructuring Law held annually since 2005 and which he co-chaired for three consecutive years.

Gerry has acted as Chair of The Bar of Montreal Subcommittee on the development of a standard Anton Piller order.

Recent involvement in the legal profession

Co-Chair of McGill Law Class of 1988, which established a needs-based bursary for students.

Judge on the Selection Committee

The inaugural Canadian Law Awards (2020) which recognizes the nation’s leading law firms, in-house legal teams, individuals and landmark deals over the past year.

Participation in public consultations on the second series of proposed legislative amendments concerning the harmonization of federal law with the civil law of the Province of Quebec, in the area of bankruptcy and insolvency

Participation in the Panorama project of the Quebec Bar, which consists in work in connection with the recruitment, retention and advancement of lawyers from ethnocultural groups within in-house litigation departments and firms in Quebec