Langlois Lawyers joins the legal communities of Québec and Canada in celebrating the 60th anniversary of admission to the profession of its counsel, retired Supreme Court of Canada Justice, the Honourable Louis LeBel. Throughout his career, he contributed greatly to the evolution of both Québec and Canadian law.

“Over the span of his 60 years at the Bar, Justice LeBel has had an indelible impact in the legal world. A key player in contemporary administrative law and a Supreme Court Justice, he greatly contributed to the progress of the law, ensuring it reflected the values of today’s society. It is a privilege for us to work alongside him. Langlois joins the Québec City Bar and the extended legal community in celebrating this extraordinary milestone,” said Jean-François Gagnon, Chief Executive Officer of Langlois.

Louis LeBel enjoyed a distinguished career marked by his dedication, innovative thinking and passion for law. His journey began in 1961, when the young prodigy graduated from the Faculty of Law of Université Laval. The following year, he was admitted to the Québec Bar. This was followed by a master’s degree in Law at the University of Toronto and a graduate degree in Private Law at Université Laval. Louis LeBel then spent some twenty years in private practice before being appointed a judge of the Court of Appeal of Quebec in 1984. He served on that bench until January 2000, when he became a judge of the Supreme Court of Canada. In 2015, he retired from the judiciary and joined Langlois Lawyers as counsel.

Throughout his career, Justice LeBel has been actively involved in the legal world. He wrote several legal articles and studies, co-authored the book Le droit du travail en vigueur au Québec, gave numerous lectures, and was a member of several committees of the Québec Bar and the Québec City Bar where he served as Vice-President in 1982-1983 and as President of the Bar (Bâtonnier) in 1983-1984. He also taught law at the University of Ottawa as a visiting professor and, on several occasions, was a lecturer at the Department of Industrial Relations and the Faculty of Law of Université Laval, as well as at the professional training program of the Québec Bar. In addition, he played a central role in the implementation of the new Civil Code of Québec.

His exceptional talent, deep dedication and considerable contributions to the legal world have been recognized many times. He was awarded the Quebec Bar Medal in 2000, the Quebec City Bar Medal in 2008 and received an honorary doctorate in Law from Université Laval in 2001. He was named Honorary Fellow of the American College of Trial Lawyers in 2004 and Companion of the Order of Canada in 2017.

Widely cited and highly respected, Louis LeBel is a true pillar of the Québec and Canadian legal communities, and his rich legacy will continue to influence future generations of lawyers. 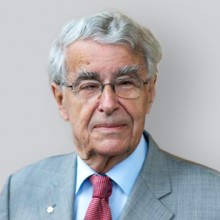