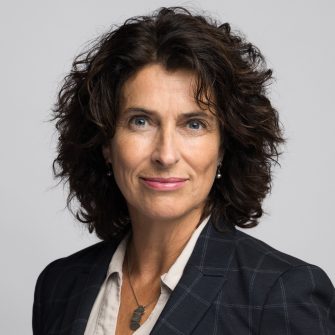 Dominique A. Jobin is a partner in the Litigation group in our Québec City office. She joined the firm after working in government for many years as a constitutional lawyer.

Dominique’s practice is focused on constitutional advice and litigation in various criminal, civil, administrative and disciplinary contexts, particularly with respect to the Canadian Charter of Rights and Freedoms and the Charter of Human Rights and Freedoms (Quebec Charter). She is especially active in the areas of labour relations, privacy, language rights and policies, administrative and penal investigations, and health and education. She advises both public bodies and private companies in matters where their actions implicate human rights and freedoms.

With expertise in freedom of expression, democratic rights, privacy, language rights and the rights to liberty and security of the person, Dominique has advised government authorities for over thirty years on the compliance of draft laws and regulations—as well as government actions—with applicable constitutional and quasi-constitutional guarantees. She has represented the Attorney General of Quebec in numerous constitutional cases before the Quebec courts and has frequently appeared before the Supreme Court of Canada.

Dominique has taught courses on rights and freedoms at Université Laval’s Faculty of Law, and she is frequently called upon to speak to members of the legal community and the judiciary on human rights issues.

Dominique’s work spans various sectors of activity, which can be grouped under the five main themes below.

1. Freedom of expression and freedom of the press

Cases involving the freedom to engage in commercial advertising and promotional activities:

Cases involving democratic rights and freedom of political expression, particularly in the context of control over election expenses and campaign contributions:

Cases involving the right to privacy in the face of the coercive powers of the state:

Cases involving legal obligations imposed on professionals and the regulation of access to health services, with regard to the rights to liberty and security of the person:

Cases involving the rights to liberty or security of the person and the obligations arising from the principles of fundamental justice:

5. Language rights and the freedom to use the language of one’s choice

2022 – Evidence and Expertise in constitutional law: training given at the XXIIIe Conférence des juristes de l’État, May 2022.

2022 – Freedom of expression and discrimination: the Mike Ward case, presentation given at a conference organized by the Professional Training Committee of the Quebec Bar in collaboration with CEDAC, the centre for studies in administrative and constitutional law at Université Laval’s Faculty of Law, March 2022.

2019 – Specialized training for government legists on human rights and freedoms (designer and trainer), Quebec Ministry of Justice, winter and spring 2019.

2016 – Recent jurisprudential and legislative developments regarding state-led computer searches and electronic surveillance: jurisprudential guidelines based on section 8 of the Canadian Charter applicable to computer and electronic investigations by the state: Regional training given to the judges of the Court of Quebec (Criminal and Penal Division), Québec City.

2015 – The jurisprudential guidelines arising from section 8 of the Canadian Charter applicable to computer and electronic investigations by the state: lecture given as part of the annual Public Legal Counsel Training Day in Québec City.

2014 – The guidelines set by section 8 of the Canadian Charter with respect to state searches of computers and electronic materials: lecture given during the training day for presiding justices of the peace of Quebec, part of the Annual Conference of the Court of Quebec judges held in Gatineau.

2012 – Freedom of expression and the open court principle: lecture and workshop facilitation during the annual meeting of judges of the Court of Quebec (Criminal and Penal Division) in Québec City.

2012 – The respective roles of the administrative decision-maker and the reviewing judge in the consideration of “Charter values”: the Doré case and its major implications for administrative and constitutional law: training seminar given to the judges of the Superior Court, Montréal Division.

2011 – Freedom of expression and the open court principle, and Synthesis of the rules applicable to legal proceedings in matters of human rights and freedoms, lectures given at the Annual Assembly of the judges of the Superior Court of Quebec (Québec City Division), Gaspé.

2007-2008 – Principal remedies for infringement of rights and freedoms protected by the Canadian Charter, training given at the Seminar for New Federally Appointed Judges, organized by the National Judicial Institute and the Canadian Institute for the Administration of Justice, in Halifax and Niagara on the Lake.

2006 – Life, liberty, security and integrity of the person as protected by the Charters: a review, lecture given as part of the training day for lawyers in the General Directorate of Legal and Legislative Affairs of the Ministry of Justice of Quebec.

2005-2006 – Introduction to the impact of the Canadian and Quebec Charters on government activity, training given during the Welcome Days for new lawyers in the General Directorate of Legal and Legislative Affairs of the Ministry of Justice of Quebec.

2005 – Did the Chaoulli decision revolutionize the scope of section 7 of the Canadian Charter and section 1 of the Quebec Charter?, lecture given at the Canadian Bar Association’s Annual Conference, Vancouver.

2004 – The concept of spouse: are society and the law moving at the same pace? and Safety and the State, organization and facilitation of workshops at the XVIe Conférence des juristes de l’État.

2003 – The essential role of evidence in Charter litigation: an example from the right to equality, and The Charter of the French Language in everyday life, organization and facilitation of workshops at the XVe Conférence des juristes de l’État.

2001 – New perspectives on the rights to liberty and security of the person protected by section 7 of the Canadian Charter, lecture given at Recent Developments in Administrative Law, a conference organized by the Quebec Bar’s Continuing Education Service; text published in the proceedings of the day.

2007 and 2009 – Lecturer at Université Laval’s Faculty of Law, course on human rights and freedoms