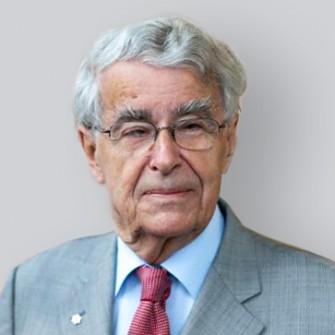 A retired justice of the Supreme Court of Canada, on which he sat from 2000 to 2014, the Honourable Louis LeBel was admitted to the Quebec Bar in 1962. He obtained an undergraduate degree in law from Laval University in 1965 and a Master of Laws degree from the University of Toronto in 1966. He first practiced law in Quebec City as an associate of the firm LeBel, Letarte, Bilodeau, Boily from 1963 to 1964 and then at Désilets, Grondin, LeBel & Associés from 1964 to 1971. He subsequently became a partner at the firm Grondin, LeBel, Poudrier, Isabel, Morin & Gagnon, where he practiced from 1971 to 1984.

He is the author of various legal articles and monographs, and co-author with lawyer Robert‑P. Gagnon and professor Pierre Verge of the labour law treatise entitled Le droit du travail en vigueur au Québec, published by Presses de l’Université Laval. Mr. LeBel has also sat on various committees of the Quebec City Bar and the Quebec Bar, including the editorial committee of the Revue du Barreau from 1976 to 1982, which he chaired from 1979 to 1982.

He was a member of the board of directors of legal-aid organization Corporation du Centre communautaire juridique de Québec from 1973 to 1975, prior to which he sat on the Quebec City Bar’s legal aid committee. In addition, he was vice president of the Quebec Bar from 1982 to 1983, and the Quebec Bar’s president (Bâtonnier) from 1983 to 1984. He has also been a guest lecturer at the University of Ottawa and Laval University.

He was appointed to the Quebec Court of Appeal on June 28, 1984 and then to the Supreme Court of Canada on January 7, 2000. He received an honorary doctorate of laws degree from Laval University in 2001 and from the University of Ottawa in 2010. He has also been awarded both the Medal of the Quebec City Bar and the Medal of the Quebec Bar. He has been an honorary member of the American College of Trial Lawyers since 2004. He was named a Companion of the Order of Canada on December 29, 2017.

Mr. LeBel acts as legal counsel at Langlois law firm in Quebec and Montreal since May 2015 and as resident judge at the Faculty of law at Laval University.

Mr. LeBel is a frequent conference speaker and has authored several publications in various areas of the law.

Areas of Practice
Back to team page