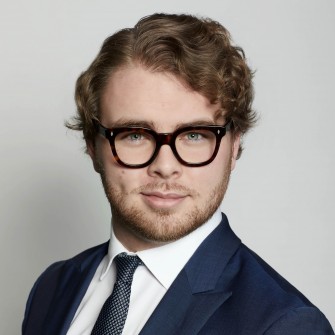 Guillaume François Larouche practices mainly in public business law and business law for Langlois Lawyers in Montréal. He is a member of the firm’s France-Canada practice group.

Guillaume François began his career as a political advisor for the Minister of International Relations and Francophonie in Quebec, as head of the France, Europe, Africa and Middle East regions and as a speechwriter. In this capacity, he collaborated in the development of several international projects and participated in diplomatic missions in Europe and Africa.

Guillaume François has a keen interest in government relations as well as in media and public relations for the projects with which he is involved. He practices law in French and English.

Scholarship for leadership and sustainable development from Université Laval, 2015-2018

Scholarship to study abroad from the International Office of Université Laval, 2016-2017

2020 − “Doing Business in Quebec, Opening a door into North America : The Law in Quebec and the Business Lawyer’s Role”, conference presented to French companies seeking to Establish Themselves in Canada, with William D. Hart, National Bank Financial, Montréal

Since 2020 – Member of the board of directors, Canadian International Council, Québec Section

Since 2020 – Member of the board of directors, French Chamber of Commerce and Industry in Canada (CCIFC) – Québec Section

2017-2019 − Member of the board of directors, Société de développement commercial Maguire (SDC Maguire)

Since 2020 – Member of the Canadian International Council, Québec Section